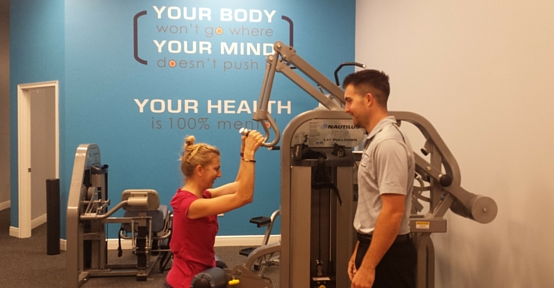 This content was originally posted on Lean Green DAD and is being shared with permission from the author.

When I first started thinking about getting back to work after my flare with ulcerative colitis, there were a lot of things to consider. You see, I am in an extremely active line of work. I play Dory in Finding Nemo: The Musical at Disney’s Animal Kingdom theme park. If you aren’t familiar with the show, it is a huge spectacle filled with musical theatre actors who are also mechanical puppeteers. Some of us are even called upon to fly through the air to add to this multi-dimensional show! So as you can imagine, jumping right back into that world after losing about 15 pounds of muscle mass was…well…daunting. But where to begin? How was I to slowly build back that muscle mass while still being cautious and mindful of all I had been through? The thought of moving too fast and landing myself back where I started was a real concern. So I started walking, taking it slow, which was great at the beginning…but I knew I needed more. Enter Andrew Noble. Cory had asked me to listen to his interview with our friend Andrew, who had recently opened a fitness studio called Smart Fitness. Sometimes Cory asks me to take notes for the website show notes. As I listened I got more and more drawn in by learning about the style of workout Andrew had created. I found myself saying, “Yeah! I could totally jive with this workout. This might be EXACTLY what I need to get back on track!”

Andrew has been honing this workout for many years. He began in a chiropractor’s office…a place where injury and fatigue in patients are common. The slow-style workout he had designed was created to protect the body while still being able to strengthen the muscles. And he also added an element that is music to any busy parent’s ears: it would only take 20 minutes twice a week! So after listening to the podcast, I handed Cory my notes and said, “when do I start?” Neither of us had expected this. I have been an active person all my life, and coaching wasn’t something that I had really thought I needed. But after listening to Andrew speak, I couldn’t deny his massive amount of knowledge and recognized that I needed a jump-start. I needed someone to push me in a healthy way that wouldn’t cause further damage to my already weakened frame. I was in.